I, Edward Ramirez, Wear Turquoise - For My Loved One. Will You Join Me? 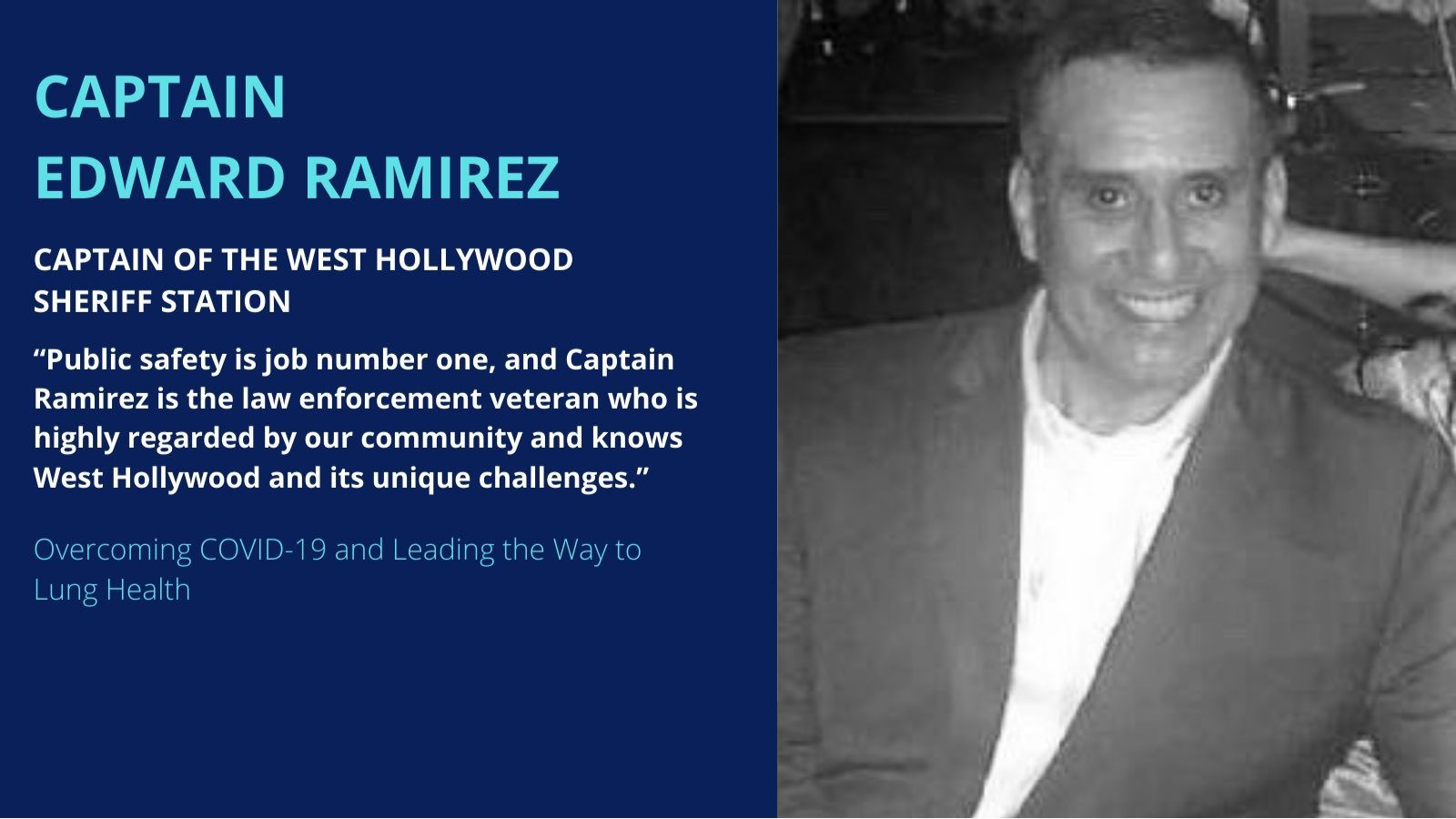 Ensures our ability to carry forth the American Lung Association mission including overcoming COVID-19 and preventing future pandemics like this.

Ramirez joined the ranks of the Sheriff’s Department in 1990 at Men’s Central Jail. He worked patrol at Temple, Crescenta Valley and Altadena stations before transferring to Sheriff’s Information Bureau and later to the Office of the Sheriff as part of the Sheriff’s security detail.

As a sergeant, Ramirez served at Century Station and as a Chief’s Aide at Correctional Services Division before being promoted to lieutenant at the Community Transition Unit. He also served as a lieutenant at several other bureaus before transferring to West Hollywood Station in 2015.

During his career, Ramirez has assisted in the creation and implementation of the Education Based Incarceration Bureau and Population Management Bureau, as well as the Community Re-entry and Resource Center at the In-mate Reception Center.

Ramirez has also been actively involved in his communities, including being a Board member for the Boys and Girls Club of Pasadena, and Shelter Partnership, a homeless support organization.

Ramirez has been married to his wife, Roseann, for 32 years, and they have three adult children and two grand-children. He is currently completing his Bachelor’s Degree in Leadership Studies and in his off-duty time, Ramirez enjoys spending time with his family, weight lifting, and is an avid Dodger baseball fan.

West Hollywood Mayor John D’Amico said of Ramirez, “Public safety is job number one, and Captain Ramirez is the law enforcement veteran who is highly regarded by our community and knows West Hollywood and its unique challenges.”

Ramirez is the second captain to be promoted under Sheriff Alex Villanueva’s new captain selection process, which involves a panel of city and county leadership as well as various community stakeholders within the area that the station is located. Once all finalists have been interviewed, the panel chair makes a, heavily weighted, recommendation to the Sheriff, who has final consideration in appointing the captain.

In American Lung Association’s pursuit to ensure lung health for all, its research funding is hard at work during this outbreak of coronavirus disease (COVID-19). A recent discovery is showing great promise for a potential vaccine. Our lung helpline and website continue to be trusted sources of information and support. Reliable resources, including guidance on how to protect yourself and your family from becoming infected, are available during this unprecedented health threat. It is important that this crucial work continue. We invite you to be a part of the solution and help prevent against future pandemics TODAY.

The American Lung Association's LUNG FORCE launched five years ago, uniting women and their loved ones to stand together and fight lung cancer. Today we invite everyone to join the commitment to lung health and for clean, healthy and livable communities for all. Leaders from throughout Southern California have joined us to become IWT Ambassadors to lead the charge toward a cleaner, healthier future.

I WEAR TURQUOISE: AMERICAN LUNG ASSOCIATION - WILL YOU JOIN THEM?

My individual goal is to raise $1,000 for the American Lung Association. However, together, with the efforts of all our Ambassadors and the generosity of supporters like you, we are trying to raise $50,000 to help ensure their mission stays strong, including OVERCOMING COVID-19 and preventing future pandemics like this! We are stronger together! To “meet” the other Ambassadors and check out how we are making an impact as a whole AMERICAN LUNG ASSOCIATION: I WEAR TURQUOISE. Please support today!